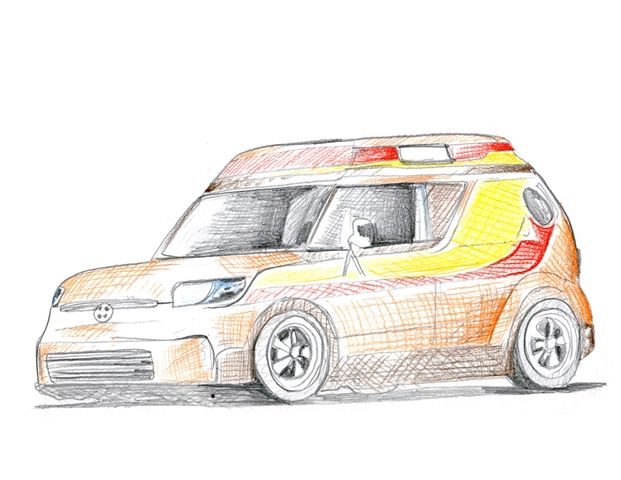 Frequently cited for its deep influence on other metal bands, Slayer has a look, sound and approach all its own. The band’s aggressive style carries into the tC sports coupe’s exterior look and band-inspired details. Inside, the vehicle has been transformed into a multimedia machine with amps, towers of speakers, a custom mixer and a 32-inch monitor for media playback. Mike Vu of MV DESIGNZ is leading the build process.

“Slayer’s fans are going to be excited when we reveal what a metal-inspired Scion tC looks like,” Slayer guitarist Kerry King said. “Working with Scion has given us another way to reach new audiences and inspire them to keep going down their own paths.”

Beyond his skateboarding career, Hawk is a rock ‘n’ roll aficionado with an appreciation for 70s style. His xB ride combines those three passions through its high-end sound system, space for skateboards and classic orange and yellow striped paint job. Details like bubble windows, interior wood grain paneling, an 8-track player and requisite shag carpet make it a rolling, retro hangout spot. The build is being led by Scott Kanemura of KMA Productions.

“Every element of this Scion xB represents some part of my life,” Riley said. “I’m looking forward to showing it at SEMA and having people check it out!”

Both project vehicles will join a diverse collection of modified Scions at SEMA, including three FR-S sport coupes designed by media partners as part of the 10th annual Scion Tuner Challenge. While the SEMA Show is not open to the public, there will be opportunities to see the Slayer tC and Skate Tour xB at Scion events later in the year.

“SEMA is the ultimate opportunity to look at Scion vehicles through a new lens,” said Doug Murtha, vice president of Scion. “We’re looking forward to showing fans what Riley Hawk and the members of Slayer envisioned for the tC and xB and encourage fans to imagine for themselves.”

About Scion Canada
Scion is the exclusive Canadian distributor of Scion tC, xB, xD, iQ and FR-S vehicles through a sales and service network of 90 dealerships across Canada. All Scions come fully loaded with many standard features including Scion’s Star Safety System. Backed by Toyota, Scion is built by passion and dedicated to quality, style and performance. Find out what moves you at www.scion.ca or www.facebook.com/scioncanada.